Thats more like it - Morecambe Bay hosts a major passage 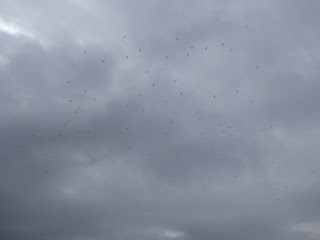 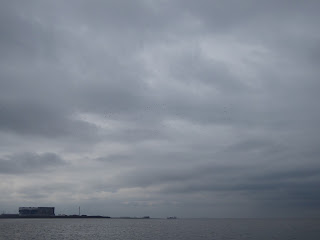 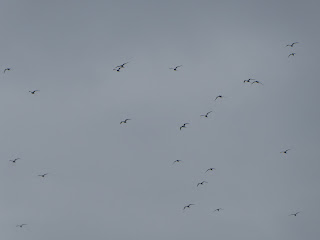 Coverage was by Nick Godden (SJ), Malcolm Downham on Heysham Skeer, Pete Marsh and Jean Roberts at Heysham sites. 0600 to 1515 at one site or another. This is the combined effort with duplication almost certainly avoided unless some birds went high inland but then returned to the sea to the south  behind observers - highly unlikely.  The cloudy and sometimes wet conditions seemed to lead to many birds hugging the sea although it was noticeable from mid afternoon that more birds were climbing high.  Thanks for the pics Malcolm

Arctic Tern - c2910 in
Black Tern - 65 in, most during the heavy rain when Nick absent - biggest flocks 28, 13, 8
Arctic Skua - 19 in - as far as I am aware all were dark or darkish morphs and all ones or twos heading in
Pomarine Skua - two light morph together early pm - no observers at Heysham at the time
Little Tern - one in 0655 only seen SJ
Roseate Tern - one in 0712 only seen SJ
Sandwich Tern - c20 blogging
Common Tern - 12 scattered amongst the Arctics - easy to pick out!
Hobby - adult in low over the sea then up over Heysham
head
Swallow - c35 in
Whimbrel - c18 in
Kittiwake - 146 in two flocks - only seen off SJ