Partial migrants on the rampage

One of the highest non-Swallow-roost ringing totals for here today without any relationship to a 'fall' of migrants.  Therefore the composition was more 'west coast cat food' than 'eastern promise', exemplified by eight un-ringed Wrens.  There was a decent movement of Coal Tit, but very difficult to document as they were in the corridor of migratory uncertainty ranging from those accompanying 'grounded' roaming tit flocks and noisy 'top of the bushes' single-species movers.  There were certainly no noisy high-flying flocks as on some previous irruptions and, as implied, many of them were mixed in with similar numbers of un-ringed Long-tailed Tit and Blue Tit.

Blackcap have been conspicuous by their absence for several weeks, so five un-ringed birds were welcome, and equally welcome was an un-ringed, presumed male on wing length, Cetti's Warbler in Middleton central marsh.  The first Brambling to be ringed for several years was also trapped on Middleton 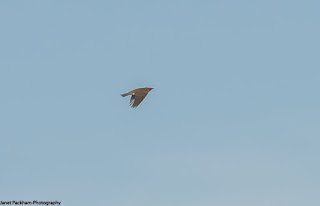