Rain in the morning eventually cleared and resulted in a nice sunny evening with light SW wind.
So far all I have is from my two visits to south shore, hopefully more to come. (MD).
Went down at 14:30 to see if many Mediterranean gulls went to beach near to jetty as it became exposed.
Rock Pipits 2 on Red Nab
Whimbrel 1
Grey seal 1
Just after the beach near jetty became exposed 4 adult and 1 3cy Meds started feeding. None were ringed. The birds would have had a chance to feed here earlier, up to 07:15, otherwise I would have expected more to turn up this afternoon.
Went back at 18:00. There were at least 16 Meds on beach plus a number on the rocks on seaward side of beach. It's hard to see looking out into the sun, but I estimated 13 of these were Meds, there might have been more. 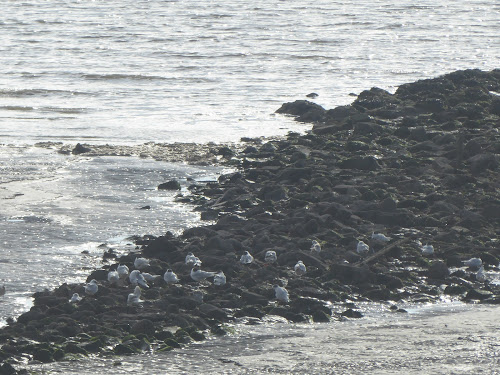 None were feeding, even the birds on the beach were either sat or stood still, many, frustratingly, on one leg. They had obviously eaten enough sand mason worms for one day! No darvic rings visible, I walked down to No.2 outflow. A further 3 adult and a 3cy Meds were on mud here. I didn't check Red Nab but minimum totals:
Mediterranean gull 33 including 2 juvenile, 2 2cy and at least 5 3cy.
I went back to wooden jetty and watched the tide flush the birds from rocks, some landed on beach. 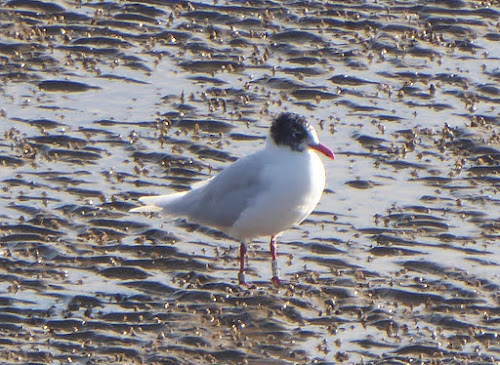 This white darvic adult was ringed as a nesting in the Netherlands in 2010. It has been recorded in Heysham in 2013, 2018 and 2019
There was also a white darvic ringed 3cy bird, presumably the one read yesterday.
Posted by Pete Marsh at 21:43 No comments: