Malcolm’s photo of just a few of the Knot and Bar-tailed Godwits today: 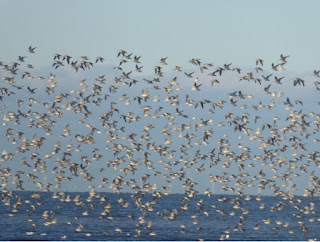 Amongst the 3500 Knot at the heliport there were quite a few with coloured leg flags. Richard managed to read 10 of them, 3 were ringed in Iceland, 2 had Dutch rings and 5 had been ringed at Formby in September 2017.  A further 5000+ were on the south side (pic)

They certainly travel eg one had been ringed in SW Iceland in May 2017, the following March it was at Formby, in April it was at Southport then in May it was back in SW Iceland (on passage to Greenland), it was then seen today wintering on the old heliport at Heysham.

On the subject of ringing, a Robin caught at Heysham today was first ringed in 2012 so pretty old by Robin standards which is usually 2 years. The oldest recorded Robin is 8 years 4 months and 30 days (BTO birdfacts).

The Czech Mediterranean Gull was on the railings on the north harbour wall.

The Cormorants were fishing near the Outfalls when one of them caught an enormous Bass which it managed to eat before any of its mates snatched it away: 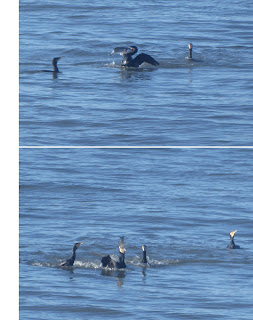 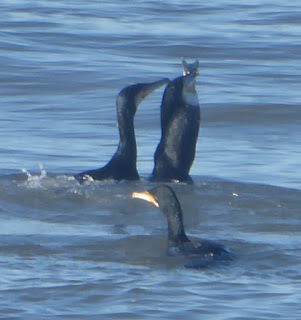 Cor, what a whopper!