Heysham Obs
Ringing today was split between Middleton (having an 'off' day) and an attempt below the old Obs tower which was rather successful.  Question:  how many Yellow-browed Warblers would we have recorded if we had been able to use our office net site this autumn?  As it is, this attempt saw our first ever example of two in a mist net on the same day (John Mason) in an area which was well-searched and blanked yesterday by two observers 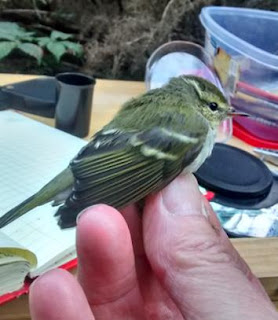 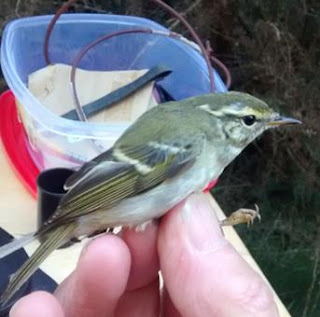 The third YBW bird allowed the comment "almost certainly the same as the previous day" for this first time during this influx.  Heard calling along the northern boundary of the reserve from the alder copse boardwalk, so necessary to check it wasn't someone messing with playback as this was a 'known site' from yesterday!  It wasn't.

Three fly-over Crossbill heading SW were the first of the year I am aware of.