It was a bit of a strange day weather wise. Breeze mainly NE, overcast with a few light showers, but nothing pronounced enough to ground migrants.

Lighthouse area early evening (MD)
Mediterranean Gull - at 16:45 there were 15 easily catching sand mason worms. The numbers grew quickly and by 17:10 there were 33 including 2 juvenile. No darvic rings could be seen. There was still 2 hours before the tide would move them on, and I'm sure more birds would have arrived, but I had to leave.
This male Kestrel appeared to come in off from the south. But it immediately perched then dropped onto and caught a rodent. 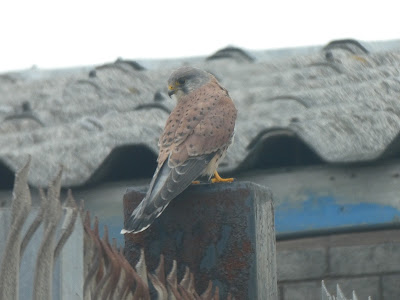 It seemed to know what it was doing, so perhaps It's a relatively local bird that knows where the easy pickings are.

Talking of easy pickings - The Jays that feed almost daily in my garden over winter and spring, have made a few summer visits. But have been much more regular over the last two weeks. This evening's visitor appeared to be a juvenile.

Just a final comment (MD)
The RNLI hovercraft I photographed yesterday was not called out in response to the young men lost at Lytham yesterday, but an earlier incident. But the tragedy, must serve to remind everyone of the dangers of walking out on the shore. It is perfectly safe if you know what you are doing, but potentially lethal if you do not. The simple guide is, only walk out when you know the tide is also going out. Don't just trust tide tables, pick a marker and keep checking that the water is getting lower.