Heysham skear - low water 07:45
Great Crested Grebe 15 - there are eight in this clip
Curlew c20
Grey Heron 1
Little Egret 8 - this is unusual behaviour, I'm not totally certain what's going on (MD). The Egret and Large gulls appear to be shrimping, and if the tide had been ebbing, I wouldn't have given it another thought, but the tide is coming in and has just reached this pool. The shrimps would not have come in with the tide, all I can think of is that there is a lot of fresh ground water running off today, perhaps the pool became too brackish on the ebb tide and the shrimps buried into the mud, the returning sea water prompting them to emerge from the mud and be eaten - it's a tough life being a shrimp!
Middleton Nature Reserve
Cetti's warbler 2 - "no swimming" pond and central marsh birds singing
Not a lot of dragonflies but the following seen:
Emperor
Black-Tailed Skimmer
Broad-Bodied Chaser
Common Darter
Mediterranean gull 1 summer plumage adult flew east over the reserve. 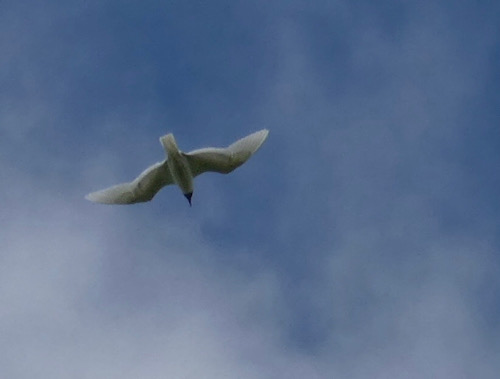 Janet took this shot of 5 spot Burnet near Heysham Moss, but on the observatory side of the railway line.
Swollen Thighed Beetle 1 reported from Heysham Nature Reserve - via Pete
Lighthouse area
An evening check
Great White Egret 1 at 18:40 flying south towards the estuary
Linnet - pair feeding at least two fledged young.
Rock Pipits 4 + young in nest
Two birds feeding together on sloping wall were chased off by the ringed male
The lighthouse nest female was taking food to the nest hole while the ringed male stood guard (I don't know if he helps when no one is around (MD))

They don't normally fly to the nest hole when they are being watched, but the female's instinct to feed overcame her caution. Even so she aborted the first flight, but went into the hole on the second flight. She didn't go too far in, so I suspect the young were out of the nest and waiting near the entrance.
The only butterflies were a Painted Lady and a Small Tortoiseshell. No dragonflies
Kevin had this splendid moth in his light trap
Posted by Pete Marsh at 21:23 No comments: