The quite fresh SW winds continue, overcast at times but long spells of sunshine.

Pete managed quite a bit in a quick morning check:
Whooper swan 55 resting on the sea plus 4 north
Red-Throated Diver 1
Canada goose 2 south over Red Nab
Black-Headed gulls 60 2nd calendar year birds on Red Nab and outflows
Lighthouse area (MD)
Rock Pipits - two birds on territory near lighthouse and waterfall. A third bird appeared to be on passage
Wheatear at least two, probably three between 09:10 and 09:30. All mature males.
One was there when I arrived and immediately flew off north. Another arrived 10 minutes later, fed for a short while then disappeared. I thought it had gone, and it probably had. But on my return from the waterfall there was another one.
They can afford to move through quickly, the scrub here, although not a large area, is clearly full of invertebrates. Presumably the hard packed surface and scant vegetation provides few decent hiding places. At least not from Wheatears, they fill up faster than a Formula 1 car!
This one catches two decent sized morsels in less than 10 seconds, although you will have to select the slow motion mode to see them.
No Wheatears have yet been reported from the normally productive foreshore south of Red Nab.
This male Stonechat was also feeding on the scrub. 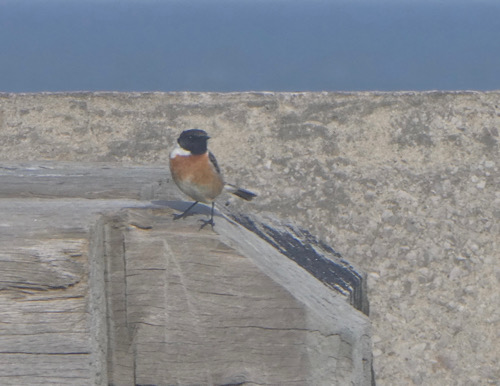 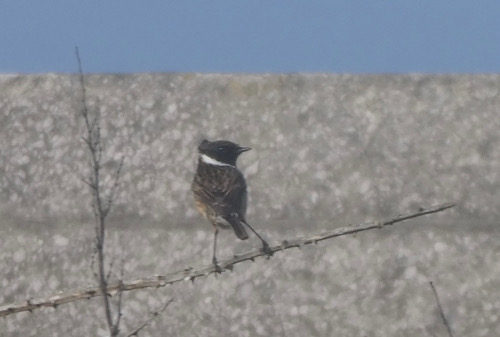 Again, this bird seemed to catching invertebrates, almost at will.
It repeated this feeding method several times from this and other promontories. But at least it had the decency to hang around. It was here at 09:00 and seen again in the area at 14:00.
Blue Tit 1 - Blue tits rarely get a mention, but I can't recall ever seeing one here before. Must be some sort of movement.
Meadow pipits c5 - just the occasional bird moving over to north.
Posted by Pete Marsh at 20:26 No comments: