Another freezing night and sunny day. The cold east wind eased slightly and moved towards ESE.

Middleton Nature Reserve
The good news is that the juvenile mute, that appeared to be stuck on the ice yesterday, is fine. Indeed, as with the last cold spell, it was allowed to join the others. This is it, second from the left. 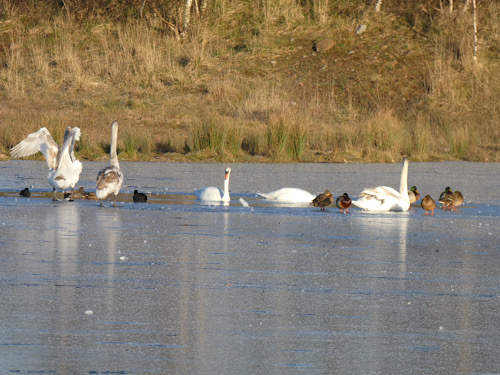 I did go with the necessary rescue equipment, but was pleased not to need it. Mainly for the swan's sake, but also mine. Previous experience at rescuing wildlife has taught me not to expect it to be friendly, helpful or grateful!
No ringed gulls again.
Mallard 6
Gadwall 2
Coot 2
No other ponds checked.
Red Nab and saltmarsh area
Lapwing 190
Redshank 70
Grey Plover 8
Dunlin c40
Ringed Plover 33
Rock Pipit - none on Red Nab again, but this one was on the rocky outcrop on the east side of the marsh.
But I wanted a clear background for this recording of it calling. It does get a barely audible reply from its mate towards the end of this clip. Perhaps, this is the bird that was displaying on Red Nab on Tuesday.
The background noise, apart from the wind, is the tide starting to surround me and the rock - time to leave!
There were no snipe or Reed Bunting seen, on the return leg I found out why:
Merlin 1 female type. Flew low across the marsh then around the edge before heading north.
This is the tide coming up the creek on the southern boundary of the saltmarsh. This creek is the culmination of a succession of ground water springs making their way to the sea. So not surprisingly some of the water froze between tides. The various groans and squeaks are not me, for once, but the sound made by the ice.
I know it's hardly the Yukon, but what do you expect from a saltmarsh creek?
The juvenile Norwegian ringed Oystercatcher was back on the football pitch with just one adult. They were managing to get their bills into the ground, but I don't know if any worms remained within reach.
A scan from Knowlys produced:
Eider 210
Goldeneye 1 male
Single figures each Red-breasted Merganser and Great Crested Grebe
No sign of any Brent geese
Finally, there were some nice cirrus cloud formations early to mid morning 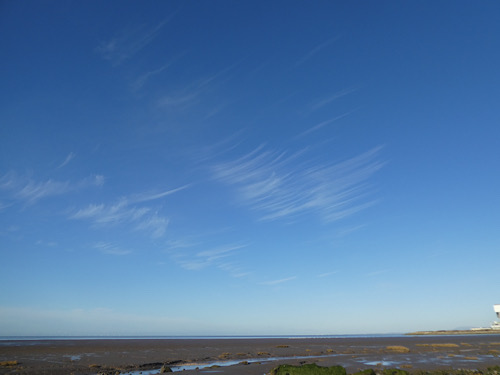 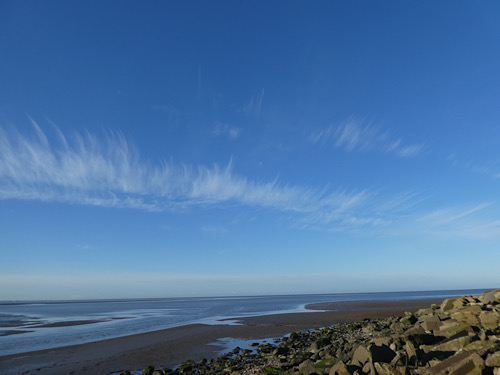