Will it come back next winter?

Update:  Its back already - just (1115hrs) flown over Heysham NR (for the first known time) heading towards Heysham Head!  Wonder where its been but it cannot have been impressed with the cliff-less Fylde coast or even further south in the almost three hour absence

and away again - at 1200 circled up really high and drifted out over the Bay and was last seen as a high dot heading towards Barrow, well over the Cumbrian border...............but it was reported again 'Heysham Head, early afternoon'!

As far as can be ascertained, the Chough was last seen as a distant dot at 0835hrs heading south, having first been picked up, as viewed from Heysham Head, flying above the heliport seawall area .  What may have been a trial run at least as far as the wooden jetty was timed by another independent observer as 0815.   The last four days have been noticeable for more contact calling, aerial antics and forays to more distant parts of its visual territory like the wooden jetty.

Bittern - One flew across the road from Heysham golf course to the recycling centre wetlands at 0750hrs.  This was searched for, but the terrain is pretty dodgy with grassed over old dykes.  No Bittern located, but it could have easily have been in the reed mace area
Velvet Scoter - showing as well as it can on the dropping tide - easier when its not in the middle of the Eiders. 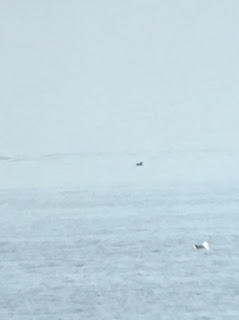 Iceland Gull - 3rd W by waterfall early am at least

More later hopefully
Posted by Pete Marsh at 10:56 No comments: