Quite a strong blustery wind mainly from NNE. Generally overcast. Quite cool.

Stock Dove - very active today - two flying together seen several times. Once to SE followed less than a minute later with two (more?) also flying to SE. They would have had to have doubled back very quickly if it was only two birds. Also single birds seen a couple of times.

Very few insects seen in the cool windy weather, but this Burnet Companion was taking a high energy drink. 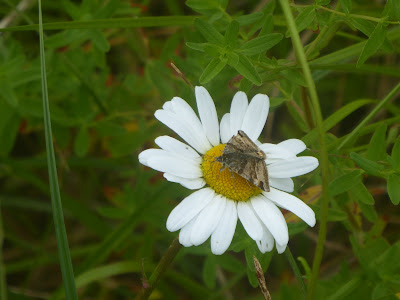 Rock Pipits - a much better showing today
Two feeding together near lighthouse, one following the other. Couldn't manage a good enough view to confirm ages (hopefully one juvenile)
One adult by waterfall
Janet reported one from Half Moon Bay, possibly one of those from John (D) report below.
Today on the Heysham Head shore there were two rock pipits foraging amongst the rocks, young birds I think. Another one flew past from Half Moon Bay towards the nest site so maybe a second brood is on the way. 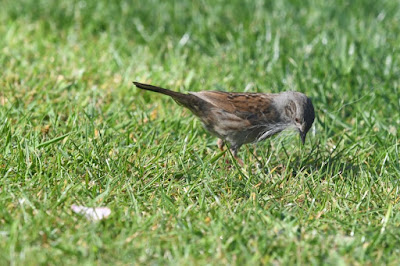 This Dunnock was painstakingly gathering dog hairs from John's garden.
Posted by Pete Marsh at 20:04 No comments: