Chough was quite mobile and elusive today ranging from the north-eastern end of the horse fields to Heysham Barrows and not spending much time along its favoured fence line
Offshore/North wall
Czech-ringed Med Gull on railings
Red-throated Diver - two offshore together early stages of dropping tide
Eider - well scattered due to anglers boats
Rock Pipit - on seawall by turbine
Watched tide up over OE
2 Jack Snipe
29 Common Snipe (I'm planning to watch Half Moon Bay rocks being covered on Monday)
3 Skylark (flew over low from south, presumably displaced somewhere towards Potts Corner. Appeared to land on grass behind foreshore)
1 Grey Plover
Salt marsh only partially covered. Tomorrow's tide will cover completely, but tonight's tide will too, so perhaps there will be little left in morning.
Lots of birds on Red Nab, but of the common variety
307 Wigeon
14 Shelduck
5 Red Breasted Merganser
3 Little Egret (unusually, all roosting on same rock) 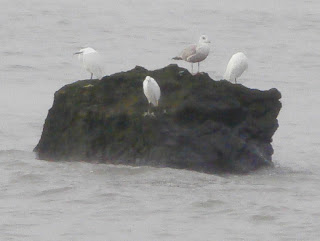