Ringlet abound and a Fritillary bonus

Janet had a walk around Heysham Nature Reserve including the dog walk and Nature Park. She saw Ringlet butterflies everywhere, it's not long since they were rarities here. Typical were seven around the small area of long grass between the newt pond and the Power Station perimeter.
Other butterflies included:
Large Skipper
Small Skipper (first records this year)
Meadow Brown
Common Blue
Red Admiral
And, most intriguing, a brief sighting of a large orange butterfly on the high meadow of Heysham Nature Reserve.
Moths included this Straw Dot
I was busy today and didn't get a chance for a walk till late afternoon, still it proved to be an enjoyable walk (MD)
Middleton Nature Reserve
Mute Swan 2 adult 7 cygnets
Moorhen 3 adult 1 chick
Mallard 1 female 3 chicks plus 7 males
Little grebe 2 adult 2 juvenile
Stock Dove 1 flew to south from scrub near Tradebe - first record since early in the year
Warblers singing
Cetti's Warbler 1 ("no swimming" pond)
Willow Warbler only two or three
Chiffchaff several
Common Whitethroat 4+
Blackcap 3
Dragonflies in order of abundance
Black-Tailed Skimmer
Broad-Bodied Chaser (only in second place as the small ponds not checked)
Emperor
Four-Spotted Chaser
No darters seen today
There's an east wind forecast for the morning, perhaps it will bring in something more interesting.
Butterflies:
Ringlet
Large Skipper
Speckled Wood
Red Admiral 1
Green-veined White 1
Common Blue 1
No small Heath seen, again partly a result of today's shortened route.
Heysham Nature Reserve
I called in to see if I could locate the butterfly Janet glimpsed this morning. There were several possibilities, all interesting. And so it proved.
Dark Green Fritillary 2 - Feeding on the clover on the high meadow, they were very flighty and presumably the same sex as neither wanted the company of the other. 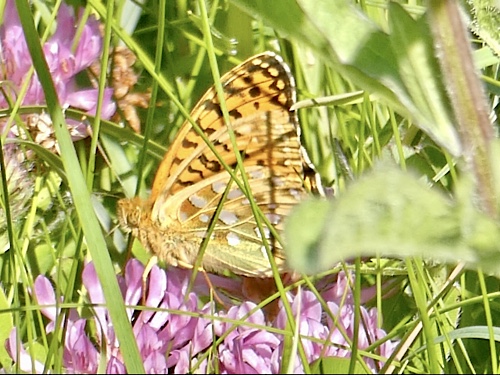 Other butterflies on this plateau:
Ringlet
Meadow Brown
Large Skipper
Small Skipper
Common Blue
When I first arrived at the meadow, this Roebuck was feeding (the background buzzing if the overhead electricity cables)
Eventually it moved on but as I was leaving and approaching the car park, it was in the Power Station non operational land. It was a mute point as to who was watching whom. Until a family party with well behaved, but noisy kids approached.
We both quietly tiptoed away!
Posted by Pete Marsh at 20:52 No comments: