First a few of the images that I couldn't post yesterday - these from Janet:
The next few are mine (MD)
Now the horticultural section:

The only records I have for today is my short evening walk. Recent visits to the skear have shown that the Sanderlings were choosing to feed on the outer skear, so today I went down early when just the inner skear was exposed and any birds concentrated - it paid off!
Great Crested Grebe 7
Red-breasted Merganser 2
Little Egret 15
Curlew 4
Whimbrel 2
Turnstone c25
Dunlin 6
Sanderling - absolute minimum 266. They were all over the inner skear, but the two main concentrations were on the western edge and along the north side. I counted 266 from a point in between these concentrations, but many would have been out of sight.
This flock is the core of the western birds, there are at least 125 in this flock.
This is less than half the birds along the northern edge
The status of Sanderling in the Observatory report is "A scarce and erratic passage migrant......" Not scarce this spring! I'm normally lucky to see one bird here at this time of year.
As well as the large numbers feeding and moving west along the skear, there was also a trickle of ones and twos flying in off from the west.
Kevin had some nice moths in his trap last night:
A nice variety of moths for the first time this year: 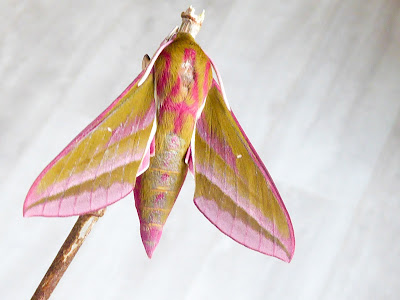