Lightish SW wind for most of the day, but becoming quite fresh by evening. Overcast with light drizzle.
Middleton Nature Reserve
Just a quick check of the two main ponds while passing this morning:
Mute 6 adult + 3 immature on Main pond. 2 adult on "No swimming" pond
Moorhen 4
Mallard 2 male
Gadwall 2 male and female
Canada goose - just one on the main pond, initially it was honking, but stopped as soon as it saw me.
I wanted a clip of it honking but didn't have time to get it in focus before it stopped. Even so, I posted it below as it does capture the quite impressive honks
I managed to get it in focus, just too late, but it did think about having another honk or two, either that or it's heaving sighs!
South shore
A bit of north morning movement
Meadow Pipit 4
Raven 1
A stroll along the sea wall late afternoon located:
Wigeon 45
Shelduck 66
Mediterranean gull 1 third calendar year bird 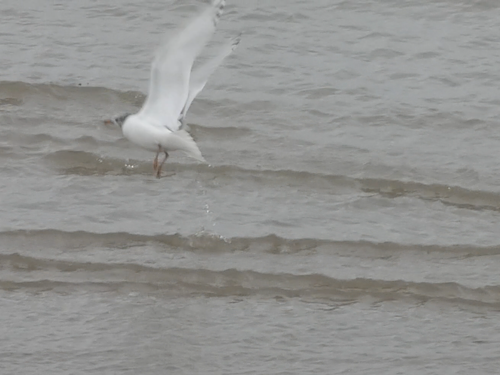 Rock Pipit - none seen anywhere on the south side today!
But this fine male Wheatear was briefly on the small area of scrub near the lighthouse. This is the first record this year
Finally, the last word (possibly) on Green jelly blobs. Pete managed to drag their "correct" name out of his extensive memory - Green-leaf worm (Eulalia viridis) egg sacs.
I placed correct in inverted commas, as although I am happy that yesterday's egg sacs were from this species of green ragworm, I still suspect some of the more vivid egg sacs could be produced by other green ragworm species, plus I like a mystery, and to me they will remain forever "green jelly blobs"! (MD)
Posted by Pete Marsh at 20:16 No comments: