There were no obvious grounded night migrants this morning.  Either they had passed straight through in the relatively calm and clear night, or they are not here yet.  Meadow Pipits, which often get going during the morning were on the move from dawn though.

Nets were set for migrants at dawn, but by the time it was proved that none was around there was not time to set up a whoosh net for Meadow Pipits, consequently the catch was low.

North Harbour Wall 0730-1300
Twite - c35 early.  Later, numbers of 95 to 100.
Linnet - small number amongst Twite. Difficult light there on a bright morning
Kittiwake - 334 in 16+ flocks 'in', 28 blogging & at least two other tightly packed gull flocks on the water a long way out
Common Scoter - 17 out
Red-throated Diver - at least 60 -  a good day count for here
Scaup - flocks of 6 (in pairs)
Goldeneye - 3
alba wagtail - 10
Meadow Pipit - 66 seen and heard but probably 10x this number - the blue sky made seeing birds difficult and when located there were often up to 8 birds for one squeak, also when looking at seabirds Meadow Pipits were passing through the view in the scope.
Pink-footed Goose - 149 north in three flocks, largest flock 80+
Greylag Goose - 4 headed north then turned and flew SW
Skylark - 1 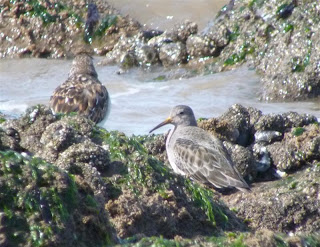 
Mammals
Red Fox - 2 seen around reserve entrance road at first light.
Grey Squirrel - 1 sunning itself at the foot of a tree in the screening belt
Harbour Porpoise - one offshore