Coastal or near coastal
Chough - seen by dogwalker at horse paddock c0900, then flew towards church.  Seen distantly along the cliffs on south side of head about 0930
Shag - 1CY quite mobile (assuming just one!) around harbour mouth/wooden jetty/north wall

Cetti's Warbler - two bursts of song from western scrape. A few contact calls from east of Fence pond
Moths
Quite a few were disturbed retrieving the hibernacula set up in the Forest School as these had been 'moved' by an unknown miscreant, including the only one identified, this Agonopterix arenella 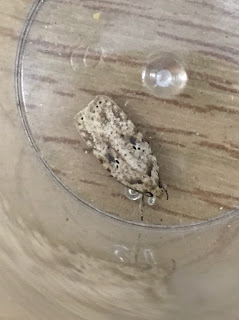