****Worth seawatching tomorrow morning if the forecast goes to plan this time!

Heysham Obs
The short-range forecast prompted both the Heysham & Middleton CES this morning in the supposed 'weather window'.  Oh yeh! We were very lucky indeed to get away with it, with a constant watch on clouds which seemed to be changing direction all the time.  Indeed, conditions were so localised that Middleton actually got away with just one small pulse of rain before the heavens opened just after the end of the CES time period (0630-0930) with all but one of the nets taken down.  Heysham NR unfortunately suffered a slightly earlier downpour (nets temporarily furled) and then six wet (already closed) nets as the rain hammered down during 'take down'.  At Middleton we decided to quickly take the nets down ahead of a Long-tailed Tit flock & entrails and this was the correct decision [you are allowed to carry on ringing after the CES time period, but the birds are not included in the CES statistics]

It was a very difficult morning to assess as there have not been any recent morning ringing visits to Middleton to know what might have been lingering.  There was certainly a mass clear-out of Whitethroat/Lesser Whitethroat by Heysham office and this was reflected in the poor CES catch there (irrespective of the interruptions).  At Middleton, on the other hand, there appeared to be a small fall of Whitethroat species! 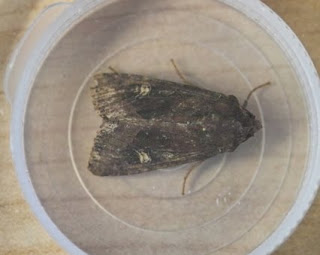 Crescent caught at a sheet & light session at Middleton (technically yesterday) - first record for SD45.  Phoenix the best in the HNR trap.  Thanks John
Posted by Pete Marsh at 13:07 No comments: