The forecasted rain belted through much earlier than anticipated and was followed by a slacker period where we, not for the first time this autumn, dodged heavy showers hitting SW Cumbria or just south of us.  Then the wind took over, albeit not a helpful direction for any seabirds.....yet

A grey-backed Lapwing on Ocean Edge foreshore saw no Pallas's Peewit fitting the bill, unlike the charter-plane-launching probable Siberian Oystercatcher on Shetland.  Undoubtedly a bit of leucism. 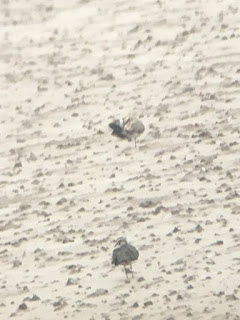 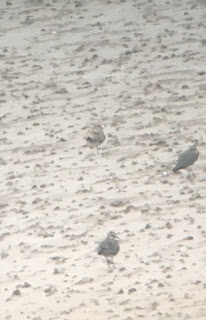 A 40 foot net was set near the office where it is completely sheltered and the feeder net was also run until the wind got up.  Not a bad catch of 31 new birds

Grounded
Treecreeper - one ringed Hey NR office area
Chiffchaff - 3 ringed and only a couple of additional birds reported.  None at all on Middleton
Goldcrest - a handful compared to yesterday around Hey NR and 10 ringed
Blackcap - at least one (1 ringed)
Song Thrush - 6 birds grounded then flew high to the east
Robin - one new bird ringed
Coal Tit - no obvious vis mig but two unringed birds caught

Fungi
A rare foray into this topic - these Fly Agaric were on Heysham NR: 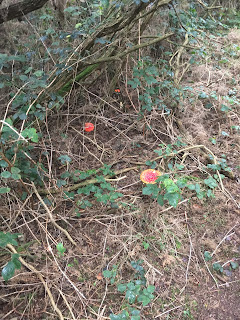