Light SSW breeze moving round to west later. Mainly sunny, but quite a heavy shower at 08:15, which effectively marked the end of the earlier movement.
Early morning report from Pete:
Everything moved earlier than or during the frontal edge of the weak weather front. Nothing afterwards.
Sea 0640-0840:
Whimbrel 1
Shag 1 2nd calendar year flew north across the bay
Sandwich tern 19 in and 7 blogging
Little  tern two in then out closer to shore
Arctic tern 12 and 14 in
Gannet 8 and 1 and 1 in
Kittiwake - 15 in, 42 in at same time as distant c40 out
Swallow at least 200 in
House martin 2
Sand martin 2
Two whimbrel and 4 Dunlin red nab
Middleton Nature Reserve - report and pictures from Janet
A quick visit to MNR at 07.30 this morning. 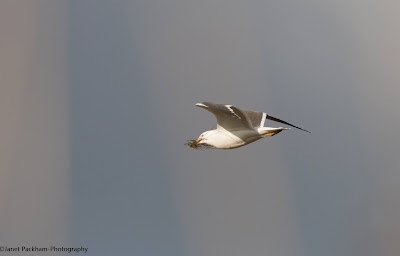 There was a Cetti's warbler singing, but as usual it stayed hidden!!
Grasshopper warbler not heard

Some pictures from the north shore today, provided by Kevin Singleton
Just out from Whinnysty Lane: