An unexpected deviation in the wind direction, it started SSE, before swinging back SW by the evening. Heavy and prolonged showers in the morning, becoming less frequent, but still heavy.

The wind direction made it unlikely to blow anything in, and the heavy rain made visibility atrocious. Pete tried a check from Ocean Edge but couldn't see anything on the sea.
Mediterranean gulls 7
Whimbrel 2
Rock Pipit 3
The wind still looks good for tomorrow though.
Heysham skear - low water 18:10
After a heavy shower, it was actually sunny, shame there was little to see.
Great Crested Grebe 1
Eider 2
Low numbers of Curlew, Redshank and Turnstone. c1000 Oystercatcher
Still high numbers of large gulls, mainly Herring.
Howard was also checking the sea, but nothing seen, so he "focused" on the Turnstone. c150 split between the old Heliport wall and the lighthouse area. 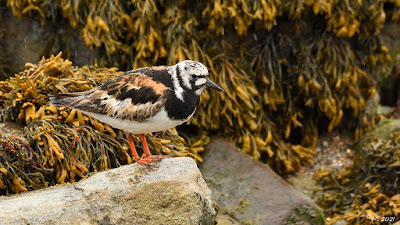 Turnstone shaking off the rain
I bumped into Howard as he was returning to his car, unfortunately he hadn't managed to shake off the rain, and was considerably wetter than the Turnstone. But he had enjoyed himself.
Finally just a couple of moths from earlier in the week. Neither rare, but but both attractive, and nice to see.
This from Kevin's overnight light trap yesterday.
I had a rather lovely Drinker Moth this morning. Again, a fairly common moth, but it's somehow eluded me until now. 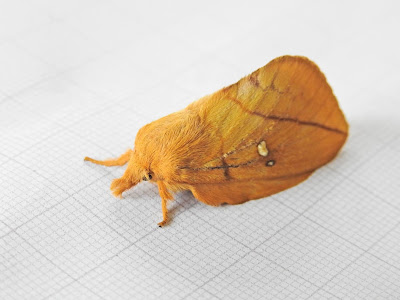