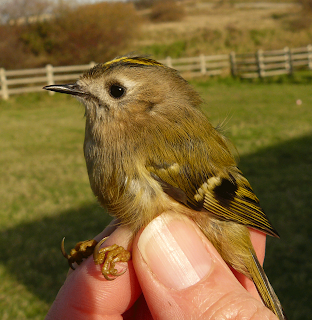 Late news: A (late) Swallow reported flying south over the reserve in the afternoon

Ringing
A small Twite catch surprisingly contained 8 unringed birds out of about 12 captures. Obviously still quite a bit of turnover, with at least 10-15 unringed birds amongst the c50 on Ocean Edge foreshore this morning. 107 have been ringed this autumn, plus 3 already ringed elsewhere, plus c6 retraps from the 28 ringed this spring (perhaps surprisingly, no older Heysham-ringed birds seen/caught this autumn) [and another ringed elsewhere seen in the field, but not captured]. A Middleton ringing session, to hopefully ring some Reed Buntings, had to be cancelled due to inaccurate wind-strength forecasts from just about every source! An unproductive session on the more sheltered reserve produced unringed singletons of Redwing, Goldcrest (see above), Song Thrush and Chaffinch plus a few retraps