The wind shifted to the south. Some overnight rain and the odd shower during the day, but some sunny spells.
Middleton Nature Reserve
Just my stroll this afternoon so far (MD)
Mute Swan
I was a bit worried when I arrived, there were two Cygnet and an adult on the peninsula of the main pond. I thought the female from Tim Butler had brought her young over. 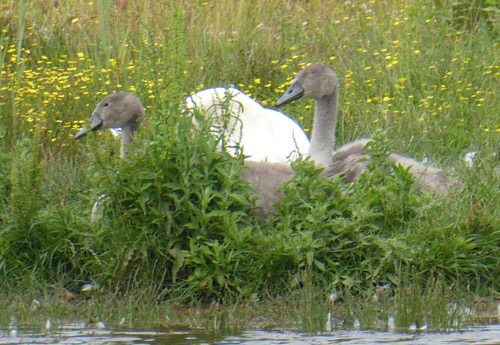 But later, the adult revealed itself to be the aggressive male from the "no swimming" pond. The female was still there with the other seven cygnets. A check of Tim Butler located the female with her two cygnets, although I didn't see the male.
Mallard the female with her 10, now full sized young are still around.
Gadwall 1 female with 3 chicks
Little grebe just one adult seen today.
There weren't many warblers singing, but I eventually managed seven species. As a marked change from recents visits, one of the previous most regularly heard species, Common Whitethroat, was today the last species and only one heard.
Cetti's warbler 1 on central marsh
Sedge warbler 1
Reed warbler 1
Blackcap 2
Chiffchaff and Willow warbler 3 or 4 each
Common Whitethroat 1
Dragonflies:
Not many, only Emperors were active all around the reserve.
Black-Tailed Skimmer 3 male on main pond
Broad-Bodied Chaser 1 male on main pond
Brown Hawker at least 2
Butterflies:
Gatekeeper - this is the first I've seen or heard of this year, but suddenly they were everywhere 20+
Meadow Brown c10
Ringlet at least 4 in 3 locations
Large Skipper 2
Small Skipper 5+
Red Admiral 1
Comma 1
Speckled Wood 4
Small White 4+
Finally, these Hoverfly were mating. It's not often you get a clear view of a stationary hoverfly (perhaps stationary is a bit harsh, but certainly not vigorous!).  These were handsomely marked, but I had to look them up. I believe them to be Helophilus pendulus. One of their common names is Footballer - not the only ones I be watching today!
Posted by Pete Marsh at 19:18 No comments: