A reasonably strong WNW wind this morning, despite a tide height best described as a 'high neap', produced quite a bit of 'splash' on to the heliport seawall for the first time this autumn.  A compact roost of c4000 Oystercatcher earlier in the tide cycle 'lost' about 800 birds which headed south whilst the rest split into two main group as can be seen in this dreadful pic which also shows the darker wave-lashed bits of the seawall. 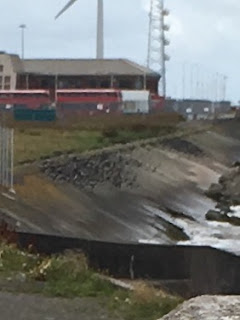 There was a small amount of Oystercatcher 'spillage' on to the top of the seawall but very little on to the 'grass' for the following reason:

Frome being largely confined to the old sand-works and surrounding area for many years,  Wild Parsnip has proliferated this year and carpeted the old heliport site and, presumably, via lorry wheels etc, spread quite some way along the verges of the Heysham bypass.  As some may already have found out, it can cause irritation to the skin, especially if the sun comes out directly after making contact with the stems, although it is not quite as bad as Giant Hogweed or even Stinging Nettle.  However, it catches people unawares as it is not on their 'nasty plant' radar e.g. any children playing along the seawall whilst their parents do some angling.  It is also a bit too tall for Oystercatchers to roost between the individual plants but this will change when they die and keel over later this autumn, especially if a north-westerly 'hooley' & 'spring' tide sends a load of seawater on to the heliport 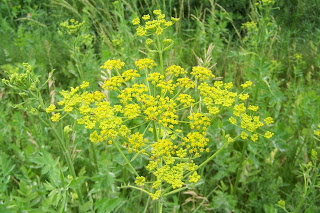