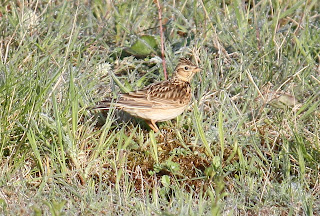 Middleton Skylark - a few days ago!

Plenty of Swifts, Swallows & House Martins over the water

Pete Cook
Posted by Pete Marsh at 15:19 No comments:

Heysham Obs
Surely there is something amongst the clouds of immature gulls!

Sunday 23rd May
Outfalls incoming tide & 1 hr seawatching before wind went WNW
Manx Shearwater - 17 out, 9 of these in a loose group a long way out
Med Gull - 2 x 2CY Red Nab - legs on one not seen, the other unringed
Kittiwake - 2 x 2CY Red Nab/outfalls
masses of 2CY Common Gulls and smaller numbers of Black-headed Gulls

Moths
Included Cinnabar - a bit of a 'rare' in these ragwort-sensitive days (e.g. hay baling)
Posted by Pete Marsh at 10:44 No comments: