Unfortunately, but understandably, increased movement restrictions will result in fewer walks by me and less opportunities of records from others. I will maintain this blog as best I can, any observations from anyone exercising in the recording area are welcome. My e-mail address is on the side bar to the right.
Malcolm
So far, just my records from a morning stroll on Heysham skeer.
Pale-bellied Brent goose 27 - this is what today's title refers to, yesterday I said that they were opting to feed on the water rather than coming ashore. Today, I went down earlier in the tide, at 09:30 there were 27 feeding well in from the water's edge along the brackish drain where the weed grows. I managed to squeeze 25 onto this frame, they include two Red Blue ringed birds, almost certainly the regular Canadian pair. 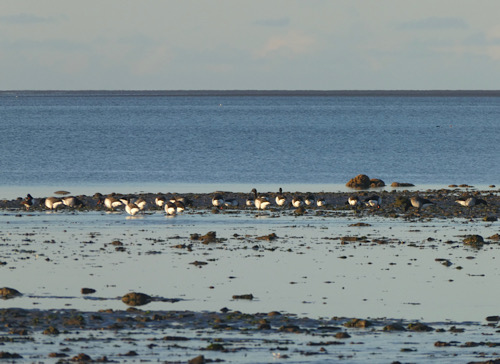 When I was leaving the skeer at 10:30, I thought they had all gone, but checking along the skeer edge found two groups of 9 and 5 close in, but on the water. I don't know if the others were still around or moved on. This is the point in the tide, where I started yesterday, so presumably they fill their bellies with weed then float a while to digest it, but can't resist an odd buffet snack.
Peregrine 1
Knot c2,500
Eider c70
Red-breasted Merganser 4
Goldeneye 1 male It was regularly feeding, I caught a dive on this clip, but suspect it was more an escape response to the passing gull. Note the two Merganser behind
Posted by Pete Marsh at 20:02 No comments: