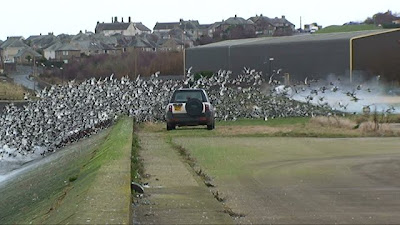 Heysham Obs
Long-tailed Tit
Change your habits and hit the bird feeders. This is what Long-tailed Tits have done over the last few winters and it has really paid dividends with survival this winter. The January 10km square survey revealed a good number and the two ringing sessions next to the office (today and 13th January) have seen a total of 10 different local birds, all already bearing rings from here & most, as you would expect, from 2009.

Ringing
As is usual this time of year, the start of the Greenfinch influx with 5 unringed birds trapped along with single unringed Blue Tit, Song Thrush, Great Tit, Chaffinch (an unringed Blue Tit escaped!)

The cannon-netting at the heliport (see photo - thanks Ian) was successful with 534 ringed and 35 already ringed, either at Heysham or elsewhere. The catch including an Icelandic colour-ringed bird. Provisional info on the catch as follows (thanks Richard):

The age structure was interesting with ONLY ONE of last year's young and only 12 2008 young. The remainder were born in or prior to 2007.

Less useful was the last two numbers of a Danish-ringed Black-headed Gull on Middleton model boat pond - birds dont walk around on ice, so you only get one side of the ring!
Posted by Pete Marsh at 12:16 No comments: