A little bit of morning movement

Very light and variable east breeze till lunchtime then mainly from the south. It became very hot by the afternoon
First, a selection of shots from Alan Wilson taken on Middleton Nature Reserve this week: 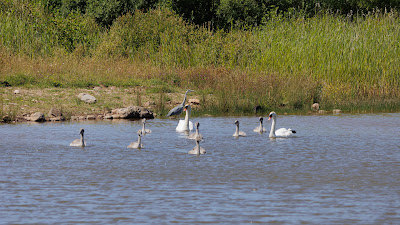 I just did a couple of checks along the south sea wall, mainly to set the baseline for resident insects, before (hopefully) the east wind and sun bring in any migrants. (MD)
First check was late morning, the air was almost still with just a few breaths from SE, by the time I'd reached the lighthouse area it had moved round to south. The only insects were a few feeding bees, 5 Meadow Brown and one "white" came in off. (There were even less in the evening check).
Linnet 27 feeding around the saltmarsh, 2 near lighthouse
Rock Pipit 6 - three on the foreshore, 1 on Red Nab, 2 near the lighthouse. These were the breeding female plus one of the birds with a bad foot. This clip was in the late afternoon, it was hot, you can see it panting, then it appears to be eating aphids off a Mayweed. Even with its restricted mobility, it is more than capable of finding sizeable insects. I can only think it was taking the aphids for their high moisture content rather than nutrition (the clip begins with a young Pied Wagtail in the background).
Blue Tit 1 flew from north landed on harbour wall briefly before continuing south
Willow Warbler 1 adult came from somewhere rested on Power Station perimeter fence before flying into the Power Station
Goldfinch 3 flew south past the roundhead
The above three records in the morning and these species have not bred here.
Common Sandpiper 2 together in the harbour wharf (seen earlier morning by Jonathan)
Redshank 15
Mediterranean gulls 18 adult 1 juvenile
This Painted lady in the Nature Park was so worn that you could see through its wings. This isn't really a record just an observation of behaviour. It rained overnight and presumably this Garden Snail wandered over the wall from the Power Station side (it definitely didn't fly here). The sun was hot today and it had spent the day in the shade under the lip of the wall. But now the sun was getting lower and the snail finds itself on the terminator of the shade. It will have to move higher or be cooked in its shell (the concrete on the exposed wall was so hot that the only walkers with a dog were having to carry it). I was tempted to move it, but might have done more harm than good. 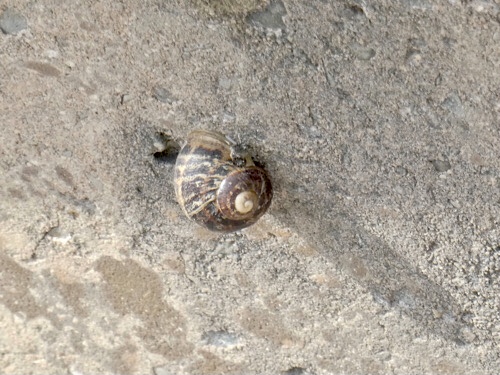