Ringing this morning resulted in a reasonable catch, with only two nets set. There were goods numbers of Swallows on passage pausing to feed over the reserve together with a smaller number of Swifts.

There must have been a mass hatching of flying ants as a gathering of a few hundred assorted gulls circled noisily over the north half of the reserve in feeding mode for half an hour or so in the mid morning.

Red Nab to saltmarsh - just before high water 09:30 (MD)
Mediterranean gull 3 adult on Red Nab
Wigeon 1 on Red Nab, possibly yesterday's new arrival.
Rock Pipits 4 - 1 on Red Nab, 2 on foreshore and 1 on the rocky outcrop on the SE of the saltmarsh. A bird held territory here all last winter, but I couldn't find any evidence of breeding here, despite it seeming an ideal location.
I went down to see what was roosting on the shore out from the saltmarsh, but it was such a lovely morning, I was far from alone on the beach as holiday makers were making the most of their holiday. And who could blame them.
The net result was that the gulls were well scattered, I couldn't see any more Mediterranean gulls.
Grey Plover 4 - still largely in summer plumage. 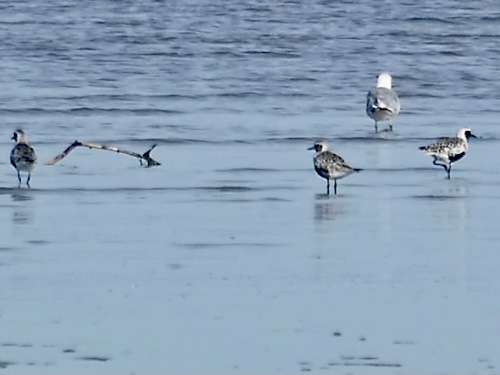 Sandwich Tern 1 adult with a juvenile 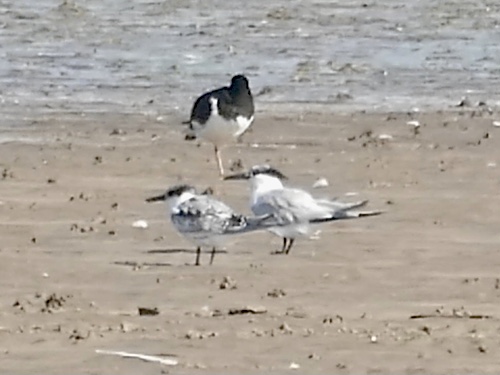 This clip is just to show the location out from the saltmarsh looking back at the foreshore and Red Nab
There was a bounty of large butterflies on the Buddleia in the Nature Park
Red Admiral 2
Painted Lady 1
Peacock 5
This clip shows the Painted Lady better.
This clip is poor quality, but of interest, nevertheless. It is a Robin eating blackberries, can't say I've ever seen them feed on berries before (MD).
Finally, I could have shot this clip in my back garden. It is the age old "game" of cat and mouse between a Grey Squirrel and Magpies. The squirrel won't burry anything if it knows it's being watched. The Magpies often pretend not to be watching and the squirrel often pretends to burry something when it hasn't! Looks like they've got fed up of subtleties this time.
Just out of the recording area - Heysham Moss Nature Reserve (MD)
I just paid a short visit in the afternoon to see how the Black Darters were doing I only checked the main peat bogs
Surprisingly few birds
Sparrowhawk 1
Long-Tailed Tits a mobile group
Wood Pigeon several
Common Snipe 1
Or butterflies
Speckled Wood several
Small Copper 1
Brimstone 1 male
Small White 1
Common Blue 1
But plenty of dragonflies both around the pools and amongst the scrub
Emperor 1
Four-Spotted Chaser 1 - this species was the most abundant around the pools at my last visit, but the only one I saw today was a barely recognisable worn specimen.
Common Darter - these were the most abundant species today, I didn't count them but at least twice as many as the Black Darters
Black Darter 14 only males seen, unlike the reasonably high proportion of females on my last visit 12/07/22.
Some were the classic black and gold colouring of a mature male. 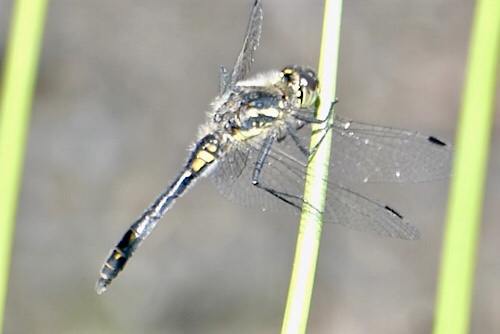 Others were almost completely black, the difference between being mature and being old. Mmm, wonder what that feels like!
Posted by Pete Marsh at 20:39 No comments: