So and so with three species of goose the 'highlight'

A bit of unbalanced coverage this morning with no coastal coverage and everyone ringing site-based at Middleton and Heysham.  There was certainly an element of wondering what I was doing there at 0530 watching three Greylag fly around in circles, but in the end about 20 migrants were ringed at the two sites.  Todays efforts took Lesser Whitethroat total to the heady heights of 14 new plus a returning adult - well above average for this time of the year and five new Common Whitethroat were welcome for what, in contrast, has been a slow spring!   Fortunately Nick was able to cover the nearby Stone Jetty and confirm that there has (still) not been a major Arctic Tern movement past here this spring

Notables
Grasshopper Warbler - only appears to be one on territory at Middleton and, as such, its a pretty quiet one.  One new in on the tank farm next to Heysham NR office (perhaps yesterday as this area was not covered)
Greylag - 3+1 over Middleton
Canada Goose - 2 over Middleton
Swallow - c30 (101 over the sea off the SJ)
Sand Martin - 2
Redpoll - 9+ over Heysham, none further inland over Middleton
Sandwich Tern - 33 off SJ
Pink-footed Goose - 1890 N (550, 62, 940, 340, 1) as seen from SJ but also past here.  Check these late flocks for the Snow Goose still on the Ribble
Great-crested Grebe - an incredible 22 on the dropping tide off the SJ.  These have been a feature for some time now but not this number.  Where are they heading as all the local ones are prancing about with weed if not sitting? 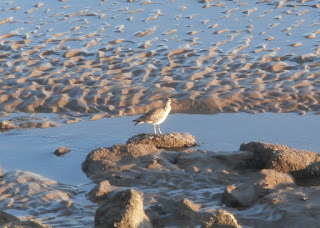