A light NNE wind with sunshine for most of the day - really a very pleasant, albeit short day.

Knot update - Howard managed to read and photograph this Sefton coast ringed bird, which is a new bird for the bay. 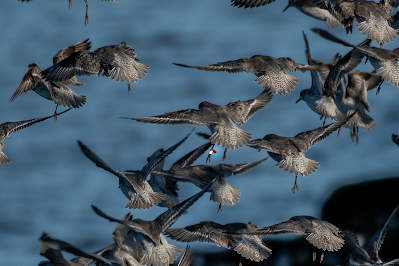 South shore
Mediterranean gull 1 adult followed the ferry into the harbour
Pink-Footed goose 130 north 10:40
Wigeon 180
Ringed Plover 31
Knot 60+  All sleeping in a tight bunch, up to their bellies in a drain. This is the water that drains out of the saltmarsh creek. It must have been this deep when they decided it was the ideal location for a nap. 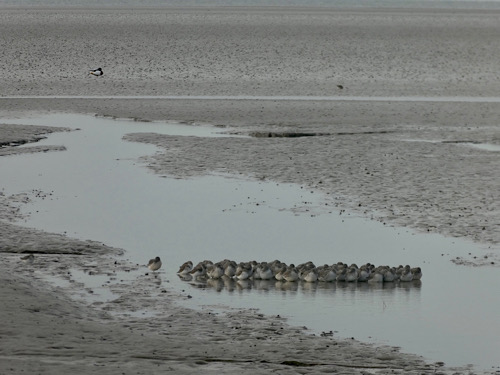 The only thing that I could think of (MD), was that the water temperature was warmer than the air. I didn't disturb them but tested the water temperature in the creek. It was cold, I wouldn't fancy standing in it for long! So I have no idea why they were resting there.
Middleton Nature Reserve
Gadwall 25 (5 on main pond, rest on "no swimming" pond)
Mallard 4
Shoveller 1 male
Little Grebe 2
Water Rail 4 squealing
No Cetti's warbler heard
Another quick check of the foreshore as the sun was setting found nothing new.
It is obvious that we are approaching the winter solstice, the sun set just to the west of Fleetwood!
Posted by Pete Marsh at 20:12 No comments: