Heysham Obs
Firecrest is a regional description species in Highland, therefore it was important to check up on a report of the Firecrest we ringed in mid-September last year being found in a car radiator grille in Elgin, Moray (400k north) on 7th January.  Here is the bird just prior to release at Heysham on 14th September 2015 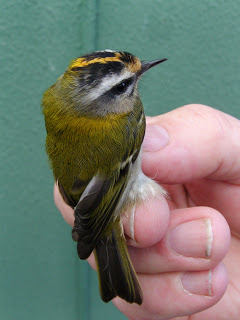 Thanks to Philip for reporting this and sending a rather sad pic of the freshly dead bird, confirming the identity and implicitly correct ring number - not always easy to discern with AA rings.  The location was more tricky.  The 'fresh' nature of the bird and the impression Philip had of a small bird flying across the front of the vehicle on the outskirts of Elgin, which did not appear to come out at the other side, does suggest that the bird had not been in the radiator grille for very long.  However, there remains the, given the condition, unlikely possibility that the bird was impacted somewhere between Wick and Elgin, the journey undertaken that day.

Not quite unprecedented - here is a 'similar' record from Norfolk:

and here is a notable recovery from an Irish Sea site at a similar latitude to us - maybe a more predictable direction:


All that happened today was that I arrived at HNR later than expected, missed the short ringing weather window and had to take the net down virtually as soon as it was set.  The only surprise was the capture of yet another un-ringed Robin.  Then ploughing through the 2015 report species accounts.  No reports from anyone else, but Malcolm did say that his male Blackcap would be on his fat-balls in the village unless he informed otherwise!
Posted by Pete Marsh at 20:24 No comments: