A milder night than of late, with some light showers first thing and more during the day, with some sunny periods. Wind light and from the north at first, it freshened slightly and drifted to NE.

Only stuff from the north shore so far, checked from Knowlys Rd, North harbour wall and my stroll on the skeer. There is no overlap in the numbers, only the single highest count is used.
Red-breasted Merganser 17 - numbers do increase in spring, but this is the highest count for a few years.
Great Crested grebe 13
Eider at least 147
Pale-bellied Brent 7. These were drifting along the south side of the skeer, showing no sign of feeding. 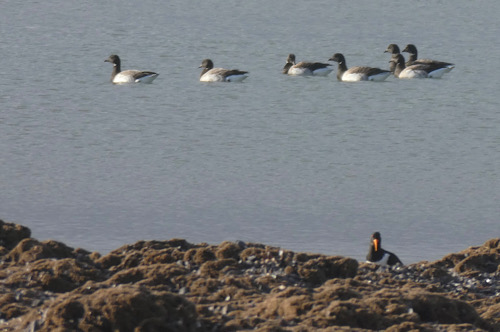 Some, but by no means all, of the pools formed amongst honeycomb worm beds still contain decent amounts of sea lettuce.
This Great Black-Backed gull has a fish (can't decide if it's a Plaice or Flounder). It knows it's too big to swallow, it has already tried, but as soon as it picks it up by the head, its instincts kick in and it can't help but to try again.
It will eat the guts and keep working on the body. I've seen them "work" a fish over a few days until eventually, what's left can be swallowed. This clip was actually one day last week, I'd forgotten about it.
I often mention the first channel when I talk about the skeer. This is it.
Posted by Pete Marsh at 20:11 No comments: