Not even suitable for ducks!

Very heavy overnight rain left fields and roads awash. The rain continued, with some sleet till late afternoon, when it eased for a while. Light NNE breeze.
Middleton Nature Reserve
Just a quick look at the main ponds in passing.
The water level on the "no swimming" pond is 15cm higher than when it was frozen, probably explaining whey there were only 2 Gadwall remaining. The 2 Shoveler were still feeding, but they can feed deeper than the Gadwall. 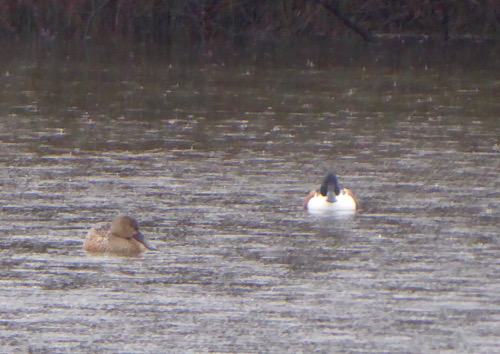 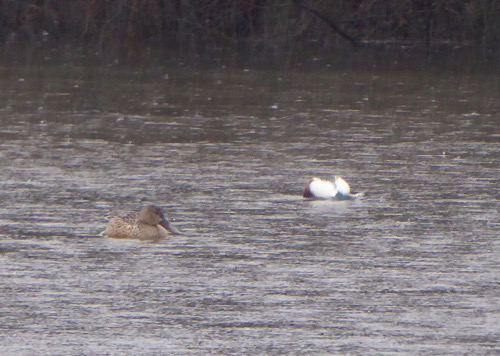 The only other birds seen on the "no swimming" pond, were 3 Coot.
The 3 adult plus 4 juvenile Mute were back on the Main pond. No other wildfowl seen.
Saltmarsh as tide was covering it
Common Snipe 2 (presumably the newly flooded fields are providing alternative feeding areas)
Jack Snipe 4
Reed Bunting 3
Rock Pipit 1
Half Moon Bay beach and foreshore
Rock Pipit 1
The beach out from Half Moon Bay has a very shallow gradient for the first 100m. This means that the ebbing tide, particularly these flood tides, very quickly exposes the mud surface, making it ideal for two different feeding techniques.
Godwits 8 - there were both Bar-Tailed accompanied by at least 2 Black-Tailed.
These were after lugworm. The mud they are feeding on is very soft, as there is still lots of water below the surface, making it easier to reach deep into it for worms.
The other birds feeding were Oystercatchers. These were after cockles. Cockles project out of the mud when covered by sea water, then quickly burrow down when exposed by the tide. But not fast enough when they are exposed quickly and the Oystercatcher are waiting.
Watch the middle bird
The Oystercatcher has not just caught the cockle at the start of this clip, this was it's third attempt to open it, but the same soft mud that helps the Godwit, provides little leverage to prise open a cockle. But it must have cracked it that time, as it was quickly opened on, what was it's fourth attempt.
Finally, I don't think this rock sculpture was created by the same artisan that created the intricate stands below the high cliffs (they are still standing by the way - see post 21/12/20), but it had the same effect.
Posted by Pete Marsh at 20:19 No comments: