The strong SW wind strengthened throughout the day and during the evening. Hopefully there will be something blown in tomorrow. Some lightish showers in the morning, but longer and heavier by the afternoon.

There are a lot of birds taking advantage of what appears to be larger than usual volumes of small shrimps. I (MD) think the shrimp are most likely to be at the first adult stage, probably just over 1cm, not including the antenna. Before that the larvae form part of the zooplankton and by the next adult stages I wouldn't expect them to be in such shallow water. All the instances below were recorded on the ebbing tide.
On the 11th and 12th December I showed the Black-Headed gulls and Oystercatcher taking advantage of them. This clip of Redshanks feasting is from earlier this week.
This is just beyond the outlet of a natural drain, the shrimps leaving the drain will be attracted to the shallow edge here. This is because the small breaking waves disturb the sediment, providing both food and cover, although the value of the "cover" in this instance is outweighed by the ease of accessibility!
Today it was much wilder, but a similar scenario played out.
This is the drain from Red Nab as it flows along the edge of No.2 outflow. The gulls here normally line up along the beach facing the sea, picking up any tit bits left by the tide. 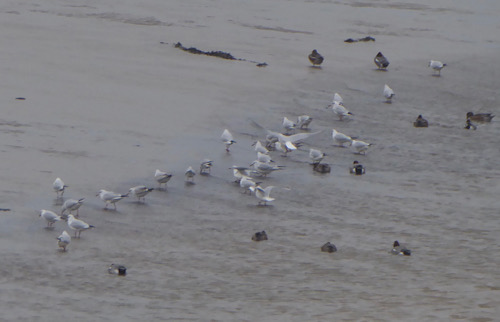 Today they were in the shallow water, shrimping.
Even some of the Wigeon appeared to get in on the act.
Also on south wall:
Wigeon c180
Redshank c150
Rock Pipit 3
Middleton Nature Reserve
Gadwall 25
Shoveller 4
Little Grebe 1
No ice today and yesterday's additional Mute and Mallard had returned to whence they came.
Pale-bellied Brent goose 22/23 in the SE corner of Heysham skeer at 15:00
Posted by Pete Marsh at 20:23 No comments: