In the earlier years, 18th April was on more than one occasion THE favoured major spring migration morning, dominated by Willow Warblers.  Recent years have seen some not very helpful weather at this time, but this morning was pretty good with a lot of offshore murk.  However it needed an early start and the alarm failed; fortunately I managed to wake up at 0520 and realise what was happening, but there was still a 16 or so mile journey via picking up Jean before we could set nets/observe vis mig etc.   On arrival, it was apparent that significant numbers of Willow Warbler were racing through, giving bits of song and the odd hu-eet before heading north-east and inland.

Although the ringing totals were minus about 30 Willow warbler and almost certainly a Redstart, missed during the civil twilight to sunrise mist net round, a reasonable catch of just over 30 birds was made, before it went quiet with the sun blazing on two of the four nets [New birds:  22 Willow Warbler, 5 Chiffchaff, 2 Blackcap, one each of Lesser Whitethroat and Pied Flycatcher].  This is the first year here since 1980 that more than 50 Chiffchaff have been ringed in spring and we have a bit to go yet.

Most unexpected was a heavy Meadow Pipit passage for this time of year - not known this before so late into April so have the easterlies pushed Scandinavian-bound birds over to this side or are we still filling territories in the Highlands of Scotland?

Vis mig/big sit by the office, minus an hour or so seawatching/coastal coverage produced:
Ring Ouzel - female chased into gorse by a male Blackbird
Redstart - male early on
Pied Flycatcher - female ringed 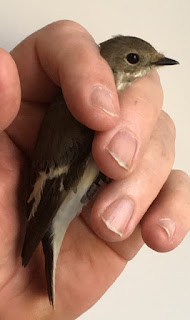 Tree Pipit - 4 NE
Lesser Whitethroat - three migrants
Grasshopper Warbler - probably two different singing males with an hour between song periods and unlikely backtracking from the general north-easterly progress if it involved just the one bird
Blackcap - two singing males passed through - this species has been in rather low numbers so far this spring
Chiffchaff - at least 8 migrants, one with pollen 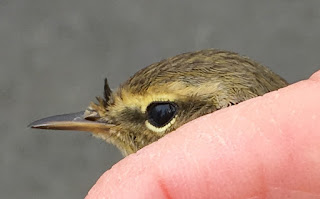