At least one is surviving

Heysham Obs
The gloom and doom over wetland birds and breeding success was contradicted in one instance by Janet's pic taken today: 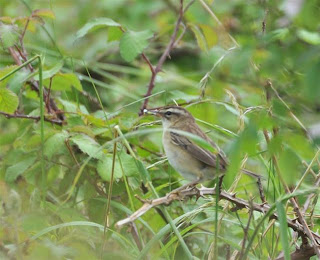 Confession time: forgot to check the gulls on the outfalls, and this after mentioning the rejuvenation of Heysham One outfall - not good enough!

Insects
Once you can find them, Four-spotted Chasers are quite obliging as the weather has semi-torpified them of late.  Still have not seen an Emperor this year or indeed Black-tailed Skimmer which should be showing anytime now in a 'normal' year 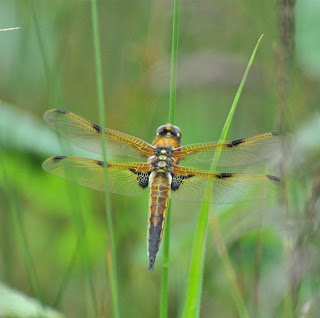 The moth trap was quite productive but no show-stoppers, other than perhaps a late Shaded Pug.  Smoky Wainscot made its first appearance of the year and I think Buff Arches and Peach Blossom were also new for the year.  Should be even better tonight - at the moment it looks the first decent 'summer moth night' and the chance of the biggest haul in a local trap since March, or was it February at Millhouses!!

Thanks to Janet for today's pics (both taken today)