Heysham Obs
The hint that there might be some Dotterel around (located at Cockersands in the afternoon) was provided by quite a noticeable day for Whimbrel movement for here.  A decent drop of Wheatear on to Ocean Edge, but grounded migrants otherwise seemed a bit sparse, especially given good coverage with mist nets

Nice ringing recovery of a Goldcrest.  Ringed in Essex on 9/10/13 as a 1CY female, caught Heysham NR on 8/4/15 and, as suspected by the tail, obviously an adult probably on its way to completing its second long-distance migration (303km).  The vast majority of captures are of birds in their first autumn or first spring migrations 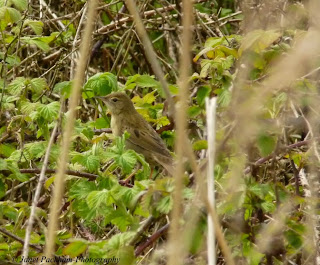