Ring Necked Parakeet east over shops by Knowlys road yesterday per Dominic Green
South Shore
Wigeon 150+
Shelduck 6
Rock Pipit 5 - 1 on saltmarsh, 1 on Red Nab, 2 on the sea wall and 1 near the waterfall. These are the two along the sea wall. They have been feeding together like this since the lighthouse nesting pair fledged one young last year. I have always thought of them as the female and young from that nest. But that is speculation based only on apparent continuity of behaviour, there is no way of knowing. (MD)
This next clip is actually from yesterday. It is the Red Nab bird, it had just had a bath and was rearranging its feathers, providing a nice view of its plumage.
Pale-bellied Brent Geese 31 - there were none on Red Nab when I passed before the tide reached it, although there was, slightly unusually, a flock of 7 heading west at 10:30. Later Tim Woodward saw 31 as late as 15:30, when, as yesterday, the tide would have left the rocks.
Kingfisher 1 - one of its favoured fishing spots is on the edge of the groundwater culvert opening on the sloping wall on Red Nab. I managed to get quite close without it seeing me, and it revealed itself to have a reddening base to its lower mandible. So, it's an it no longer, she's a she! 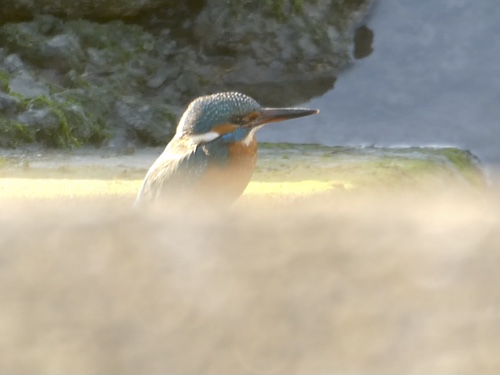