The wind was back to SE more due south later. Mainly overcast and showers, but occasional sun.

Only my stuff so far (MD)
South shore
Wigeon c100
Linnet 24
Common Snipe 13
Middleton Nature Reserve
Gadwall 9
Teal 3
Little grebe 2
Shoveller 1 male
By popular demand (actually 3 polite requests)
Here are the directions to locate the Heysham Labyrinth:
The labyrinth is a maze like engraving on the Heysham Head sandstone. It's about the same size as a dinner plate. It's almost identical in size and style to one in Tintagel Cornwall, which is either Bronze or Iron age. For more information check on line.
It's on a horizontal ledge in the middle of Heysham Head cliffs. This picture shows the general location.
Note the rock fall to the right of the arrow.
This is the area looking in the direction of the arrow 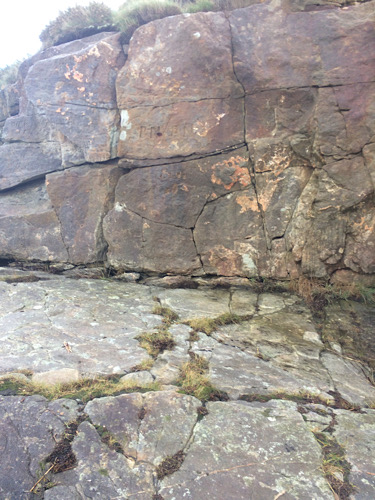 Note the distinctive graffiti on the cliff wall
This is looking down onto the ledge. The "T" at the bottom of the picture is easily found (it's the start of TDRI). But at about 8 o' clock inside the yellow circle there is a more difficult TH or TM. This cuts into the labyrinth. The yellow circle actually describes what's left of the labyrinth. 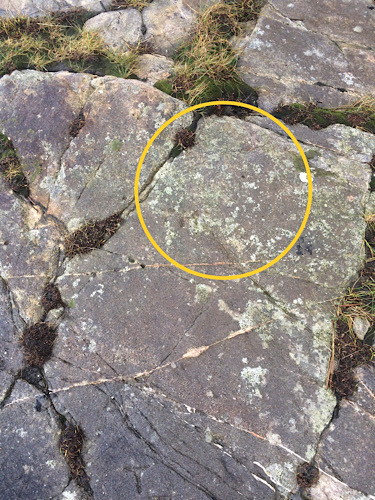 Impossible to see anything from this angle.
Janet checked it out today and in a period of brief sunshine, and a low angle took this, really very good, shot 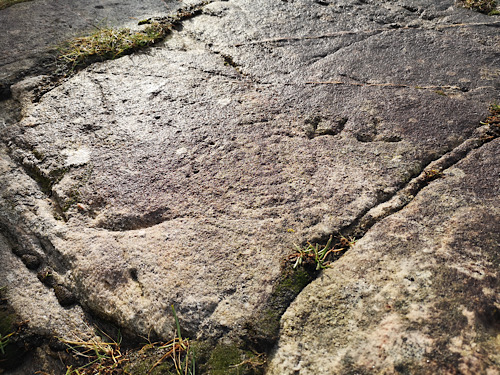 In the absence of a low sun, try a low angle shot taken with a flash.
Speculation about this engraving ranges from bronze age to 20th century. In my opinion, the amount of deterioration over the last 25 years,  I can't believe it to be more than a few hundred years old. But I have been known to be wrong. Either way, it is part of Heysham's heritage that won't  be around for ever.
Posted by Pete Marsh at 20:36 No comments: