Rock Pipits 3 - both lighthouse adults were collecting food so there must be chicks in the nest. This is the ringed male waiting with food above the nest site, but he wouldn't go to it as there were a few people around. Eventually he flew to the female and left it with her.
A third bird was chased away.
Middleton Nature Reserve late afternoon
Just a quick check of the two main ponds.
Cetti's warbler 2 - male singing from "no swimming" pond, plus one from the scrub on the north side of the road where the old brick building used to be. This area has become denser scrub over the last few years, this is the first time I've heard a Cetti's from here.
Dragonflies - both Black Tailed Skimmers (3) and Broad-bodied Chasers (2) males defending territory on the main pond.
Wildfowl- no change in status except the female Mallard has left the 10 young birds to fend for themselves, they have all remained together for now.
Janet sent these shots of quite well grown fox cubs playing in the horse paddocks at Knowlys Road. 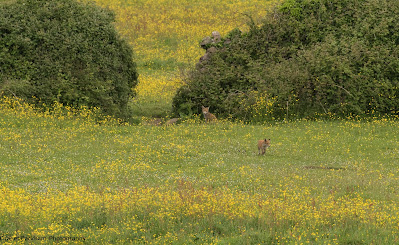 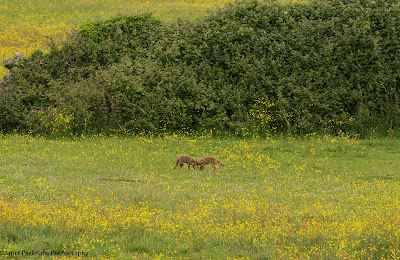