The forecast that wasnt

Heysham Obs
Geared up for night migrants this morning, then the skies cleared after thinking the early morning cloud to the south was the frontal edge.  Cue a passage of Tree Pipit and Lesser Redpoll & nothing to lure them into the nets until it was too late and sunny.  Not helped by locking myself out of the office at the critical time and having to waste time collecting a spare set of keys.  Lots of Swallows along the north wall but just one early group of Arctic Tern so far.  6 late Pinkfeet NW.  Best bird so far an early morning flava Wagtail (no detail seen on bird but sounded like flavissima)

North wall 0610-0945
Great Skua - one in at 0755hrs (& one possible very distant skua spp earlier)
Gannet - 4
Sandwich Tern - just 5
Little Egret - feeding in channel along seawall - flew off north
Swallow - at least 204 with others passing behind observers
Goldfinch - just 5
Lesser Redpoll - 8
Whimbrel - 12
Kittiwake - distant flock of 50 presumed this species (but dont count in records)
Arctic Tern - a flock of c20 rose high in the air and disappeared very early on and this was the only evidence of movement with just 4 subsequent birds lingering
Sand Martin - 3
House Martin - 3
Swift - 1
Pink-footed Goose - 6 north
White Wagtail - one in-off, just about the only thing seen 0915-0945hrs
Meadow Pipit - one photographed by the heliport - late migrant or territory?  Thanks Janet: 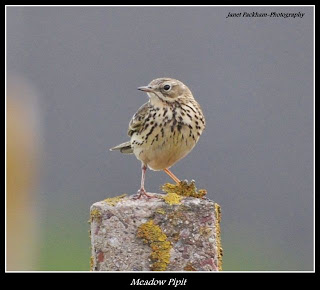