The early wind was quite strong and from SSW, by the afternoon it had eased a bit and moved more to SW. No sun today, but plenty of showers to dodge.
Heysham "skear"
The answer to today's title is .......when it's a neap
Not what you would call a joke, but I always feel that these very low neap tides, just don't seem to make an effort! (MD).
Today and tomorrow's tides are the lowest neap tides of the year, and pretty much as low as they get. Low water barely exposed the inner skeer. It's very hard to portray with images just what little movement there is on these tides, so I'm going to resort to mathematics! But first this shot is low water today. I am stood in the sea looking back at the shore. 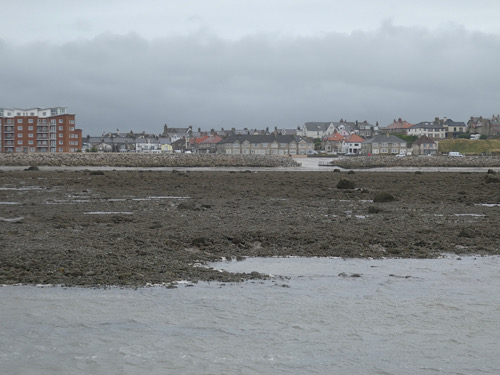 So, this is low water today 3.44 metres. High water was 6.61 metres. So the height difference between low and high water is 2.17 metres (7 foot 1 inch, if you are still pre 1971!). In other words, if I stood here on a decent sized tin bucket, my nose would still be above the water at high water (Please don't try it).
Little Egret 8
Waders, mainly very concentrated Oystercatcher at least 2,000. Also Curlew, Redshank, Turnstone, Ringed Plover and Knot.
There were two smallish flocks of Knot c100 in total. This group are mainly resting, but there is obviously plenty of food available. You can see one of these eating three small molluscs, probably young periwinkles, without needing to move.
No ringed birds seen today, but just this one flock checked in detail, and most of their legs were hidden.
Middleton Nature Reserve
Just a brief check of the two main ponds on my way home:
The only wildfowl on the main pond were two adult Moorhen. Everything else on the "no swimming" pond.
Mute Swan 2 adult plus 9 cygnets. I took a shot as it could be the last family group shot.
Coot 1. First one seen for a couple of weeks.
Moorhen 2 adult 5 immature (plus 2 on main pond)
Gadwall 18
Mallard 1 male, not the white bird.
This clip shows the Coot, an immature Moorhen and a female Gadwall feeding.
South shore early evening
Red Nab
Rock Pipit 3
Little Egret 6
Wigeon 2
Chiffchaff 2 in the Elder bush on the south inner harbour wall. This is the largest shrub along the harbour wall and regularly attracts off passage birds. This isn't a great clip, but it shows which bush to check out. Both Chiffchaff are visible briefly at the start of the clip. At the end of the clip one is being chased off by a Robin.
Pete and Jean also managed a check a bit later, and did a much better job of Red Nab than me.
Mediterranean gulls 12 including 2 x 1st winter
Eider 87 past Stone Jetty from Heysham direction
Posted by Pete Marsh at 20:45 No comments: