Green Woodpecker shows up on cue

Light WNW breeze, rain early on then fine till late morning when the rain started, becoming increasingly intermittent showers by the afternoon and a bit of sunshine by the evening.
Only my stuff so far, but not a bad day. (MD)
South shore
Mediterranean gull 1 2nd calendar year on Red Nab (probably missed others)
Wigeon 54 - feeding out from the saltmarsh till the Samphire was out of reach, then most moved towards Potts
Mallard 2 on saltmarsh
Linnet 46 on saltmarsh
Common Snipe 3 on saltmarsh (long before the tide covered it)
Jackdaw 13 south
Rock Pipit 1 on Red Nab
Wheatear 4 (one on saltmarsh plus three together on foreshore)
There were lots of small birds between the lighthouse and waterfall, probably seeming more than there were as three Robins were battling it out and stirring everything up.
Robin 3
Dunnock 1
Wren 2
Goldfinch 12
Greenfinch 2
Linnet 2
Meadow Pipit 1
Just a few Black-Headed gulls feeding on the outflows
Guillemot 1 first winter bird diving close in along the sea wall 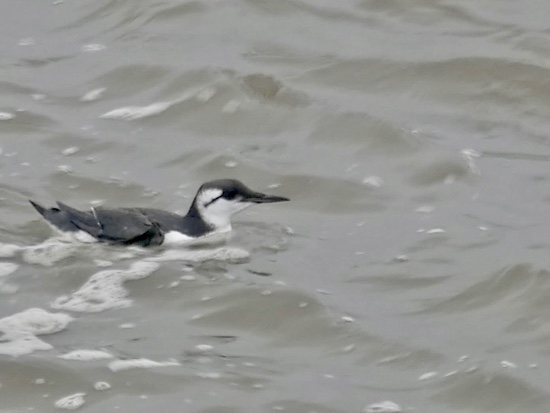 I didn't see it catch anything, but last seen making its way to harbour mouth. If it finds the waterfall, it should also find plenty to eat
Heysham Nature Reserve
Just a quick look in the late afternoon, primarily to see if I could relocate the Green Woodpecker seen by Alan on Monday
I'd had a quick look yesterday afternoon (it really was a quick check, it only takes 2 minutes from the car park to the top track were the dead trees are), but no sign of it then. Today it showed nicely, I wouldn't say "confiding" but definitely obliging. I'd just reached the top track where I could see the dead tree tops at 16:20. The Green Woodpecker called loudly as it flew from the east side of the reserve and landed in the dead tree, in a position that from where I was, would be one of the few lines of sight. It hung around a few minutes before heading to the north of the reserve, later I heard it from the east side again.
Sorry about the swaying in this clip, it was me not the tree swaying, I had to balance on tip toes to see the woodpecker. It seemed to be scraping the loose bark off with the edge of its beak.
Also on the reserve:
Mute Swan 1 over to east
Moorhen 4
Wood Pigeon were everywhere, no movement, just milling around. 10 was the the most seen at one time, probably double that.
Bullfinch 2
Chiffchaff 1
Jackdaw 25 over to east
I walked back past the dead trees on the way back, and there was a woodpecker in the same same tree, but this time a female Great-Spotted Woodpecker, it would seem that these trees are worth keeping an eye on.
To get to this area, leave the car park by the gate near the offices, walk up the hill, just before the top there is a gate on the right, this is the top track. The dead trees are about 150m from the gate.
Posted by Pete Marsh at 21:05 No comments: