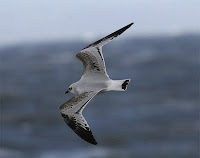 This is the 'resident' 1st winter Med taken by Mike Watson during the recent seawatch. Earlier, when there were more traces of juvenile plumage and a less well-defined facial mask, some observers were having problems sorting out this age class from early, rather 'contrasty' juvenile Common Gulls. Thanks Mike.

Heysham Obs
All birding was in an hour between the rain (outside) or in the car (high tide) when one of us should have been thrashing the rain-sodden bushes in reasonable migrant arrival conditions. Too much work to do.

These are the same two geese taken a day or so later at Cockersands. Thanks Stuart.
Pale-bellied Brent Goose - 2 unringed adults Red Nab, then off Ocean Edge saltmarsh around midday
Kingfisher - one
Med Gull - adult

Elsewhere
Nothing yet
Posted by Pete Marsh at 12:41 No comments: