Peregrine stirs up the waders!

Heavy overnight rain cleared early. Very light breeze early on freshening slightly in the afternoon. Plenty of sunshine for most of the day.
Middleton Nature Reserve
Report from Alan,

Ringing this morning produced a decent catch of 29 birds. After a very misty start with a particularly heavy dew the morning was calm and mild with a clear sky.

No Pink footed Geese were seen or heard today. A slow trickle of Meadow Pipits responded to the mp3 lure, probably about 50 in total but not systematically counted. They were dropping from height out of the clear sky and not seen passing over. Two further Grey Wagtails only were colour ringed.

Wheatear 3 (only one on the way out, three on the return)

Rock Pipit 3 - 1 near rocky outcrop 2 at slipway end of foreshore trying to chase off....

Meadow Pipit 8 grounded near slipway plus 6 over to south

By the time I was on the shore, all the waders were spread all over the beach, not just along the waterline. I took this clip while I was thinking how to best check the birds without spooking them.

I needn't have bothered, just 20 seconds after this clip, the beach was empty! A Peregrine had lifted everything and had driven them south. So I stayed were I was and waited, sure enough the waders started returning, but the attack had left them flighty. By this time Howard was also on the shore and took this shot of me. I was checking birds already returned, the birds behind me are also returning. 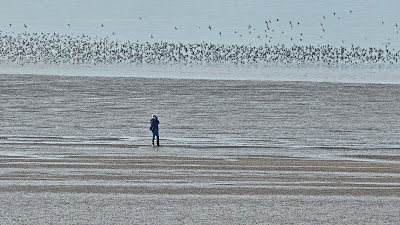 The significance of this shot is how far from the birds I was at this point, but the tide was coming in and bringing them closer, no need to move. The returning birds split into two groups as yesterday, I stayed with the southern group while Howard checked the ones near the saltmarsh.

Neither of us attempted a detailed count but species same and numbers very similar to yesterday. Although in my group there were

Sanderling 7 - I counted 6 in real time, but this clip shows there to be at least 7.

I like this clip as the youngster hops to catch the adult up
Both groups kept lifting and reassembling, I didn't see the Peregrine again, but when they are flighty like this, it just takes one bird to take flight and they're all off. Anyway, my group moved further south, so I walked off.
This is Howard checking the close in group, you can see the slipway behind him. But also not a bird in sight, Howard was a good distance from the birds. 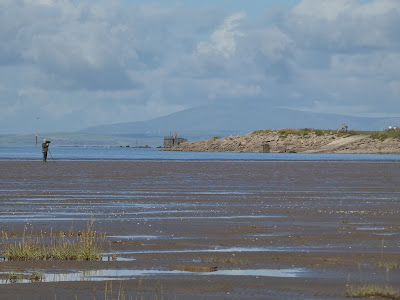 Here are a couple of Howard's pictures:

Heysham skear
I just had quick check in the evening sun (MD)
Eider 2
Red-Breasted Merganser 13 (5, 6 & 2). This is the six
Little Egret 6
Pink-Footed goose 23 came high from the north before turning to head west towards Barrow.
Waders: Oystercatcher, Curlew, Redshank, Turnstone, Dunlin 1, Bar-Tailed Godwit 1
It's strange, there were 50+ Godwits on the south side this morning, but I was really pleased to see this one.
Posted by Pete Marsh at 21:05 No comments: