Nothing startling, but interesting none the less

Another overnight frost, but no more snow. The north wind was fresher and cold, but the air temperature was higher and the sunshine made it pleasant.

Heysham skeer - low water 08:15 (MD)
The sunrises in Heysham are rarely as splendid as the sunsets, and today was no exception. However, the rising sun did light up the South Lakes hills nicely.
Despite the beautiful backdrop, something didn't feel right - I didn't like it......it was too quiet!
Then I realised why. Today's low water uncovered the middle and outer skeer. On recent visits only the inner skeer was open and all the birds were there, today there was nothing on the, almost exhausted, inner skeer, but also no birds on the middle skeer. They were all on the outer skeer beyond the first channel.
This is why, the middle skeer is largely covered by this year's new honeycomb worm colony. 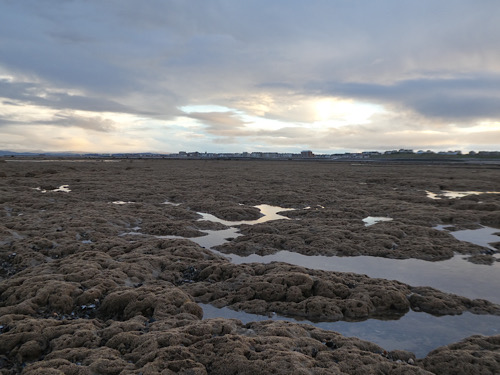 It looks like, and effectively is, a desert, particularly for the Oystercatchers. Later when the tide covered the outer skeer, the Knot fed here, but nothing else.
Eider c60
Great Crested grebe 2
Red-breasted Merganser 2
Knot c1500 - later there were 3,400 Knot roosting on the Sunny Slopes Groyne. 5 of these were colour ringed and read (ref Pete).
No Brent again today, but I did check the weed beds, there is still plenty left.
Middleton Nature Reserve
I just popped in for a quick check on my way home, unfortunately, just too late!
The hole on the main pond had been deserted by the Mute swan. As I approached the "no swimming" pond I realised where they had gone. 15 Gadwall were flying around, the Mute had joined the wildfowl on  the "no swimming" pond. 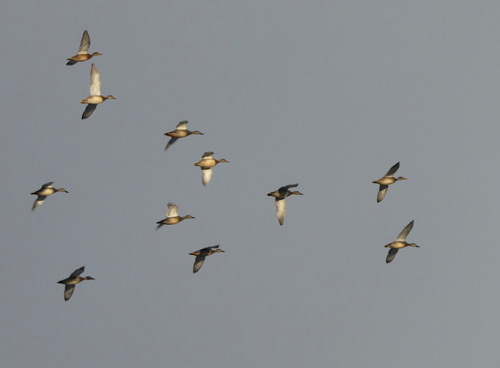 It wasn't the Mute that flushed the ducks though, it was those who feed them, which necessitates going down to the waters edge where the open water is. 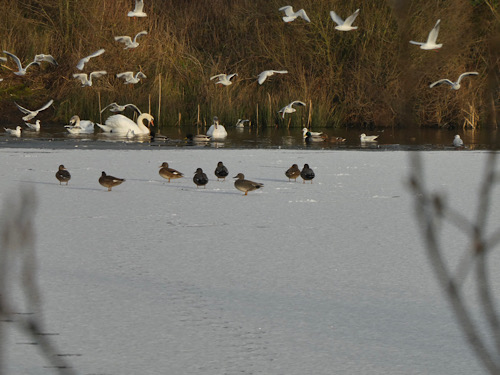 A few hardy Gadwall toughed it out on the ice this time, but there are several regulars who feed the mute, and I knew it was only a matter of time before all the Gadwall left. Sure enough a quick look in the afternoon there were only: Mute, Coot, Mallard, plus at least one Little grebe left.
Mediterranean gull 1 adult behind the ferry.
Red-Throated Diver - 1 out
Both the above from Pete
Saltmarsh area - high water 14:00
There were several cold weather displaced birds around the saltmarsh. All seemed to be readily finding food.
Reed Bunting 3
Blackbird 2
Song Thrush 3
As all good reference books (google now I suppose) will tell you. Song Thrush eat snails
Robin at least three additional birds, 5 in total, all managing to coexist without too much bickering. This one's ring matches a sequence used on Middleton during 2020.
Like the Rock Pipits the other day, it seemed to be finding plenty of bits on the high water line.
Also:
Dunlin c40
Ringed Plover 1
Grey Plover 1
Rock Pipit 2 + 1
And finally, while I was watching the above, look what was above, watching me!
It seems to be carrying a lame back leg, it will have to rely on scavenging.
Posted by Pete Marsh at 20:16 No comments: