Heysham Obs
A bit of instructive birding this morning when all the gulls were head-on perched on Fisher's roof as viewed from the north harbour wall about 400m away.  I was told on arrival that 'it wasn't there' but this was because of a perception problem with a face-on white-winged gull in perhaps especially early winter juvenile plumage.  The base colour of the breast and underparts is darker than similar age argenteus Herring Gull nearby and, at that range, appears a uniform brown, not a paler dirty white with darker flecks as on the Herring Gull.  So simplistically, you were actually looking for the darkest juvenile/first winter bird as per head on views!

On the other hand if it's side on as in this picture, it's a doddle! 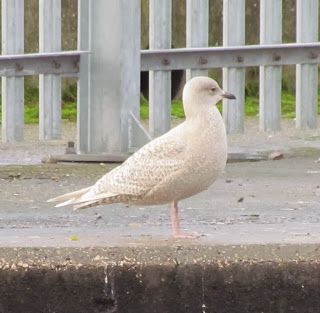