Plenty of stuff grounded and some interesting recent ringing recoveries

A very heavy downpour about 11:00 last night, almost certainly followed by more showers, but it was fine by the morning. It was overcast and dry till lunch then another heavy shower. Sunshine in the afternoon led to thunder showers by evening. East to ESE light wind all day.

I had a walk around in the hot afternoon sun (MD)

6 Gadwall  and 1 Shoveler on "no swimming" pond

Water Rail at least 3 squealing, including 1 somewhere on the industrial site side

Common Sandpiper 2 seen both on main pond and the "no swimming" pond, but think they were the same mobile birds

Despite it being hot, the rain must have dampened the insects down as there were not many

I checked this morning (MD)

Meadow Pipit 9 grounded plus 3 over to south

Wheatear 5 - Janet also saw one below the Barrows on the north side. This is one of Janet's pictures of a typically sleek Wheatear 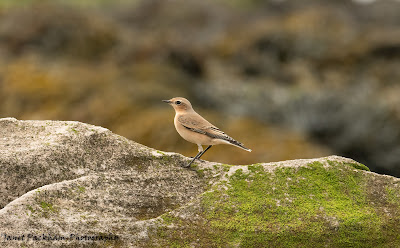 I've posted Janet's picture here as a comparison to a, definitely not sleek, Wheatear on the foreshore. The larger birds are normally associated with birds that breed in the far north, as far as Greenland. But this might just be a big bird.

No sign of the Kingfisher on Red Nab today, but the neap tides were not often visited last winter (the freshwater stream only has fish in it when the saltwater fills it, allowing the sea fishes to move along it). Mark Jones reports that there was one on the dipping pond on Heysham Nature Reserve, a week ago.

Sandwich Tern 2 adult flying towards the Lune estuary - this is one of them, the other not far behind.

This next clip is of a Chiffchaff in the Nature Park catching a fly, it happens too quickly to see in real time, indeed too quickly for my camera to catch, but this shot is a blurry still from the end of the clip, showing the end of the fly! 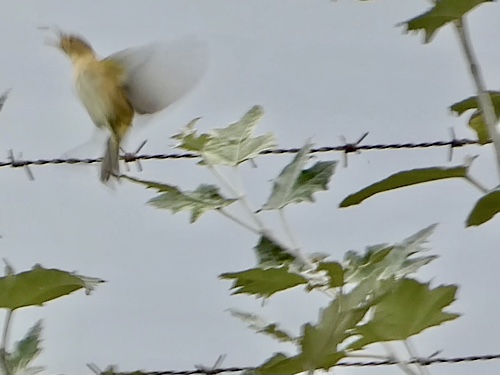 Finally, this clip is from Middleton Nature Reserve this afternoon. It shows Black ants "farming" aphids. This is a great example of a symbiotic relationship, the ants protect the aphids from predators and the aphids provide the ants honeydew (the aphid's waste). Don't suppose the bramble is impressed though.