Steady trickle of seabirds early morning with very few after 07:30. Gannets were hard to count as they were milling about, going in then out then having a sit down. More or less the same number went out as in so the total below is probably about right. Most birds, apart from Sandwich Terns were distant and a telescope was essential.

Dragonfly
The first 4-spotted chaser of the year on Middleton - perhaps surprising before Broad-bodied? 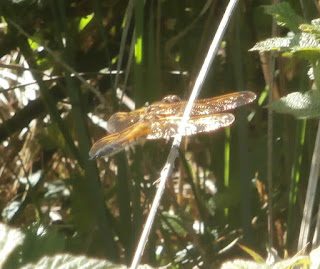